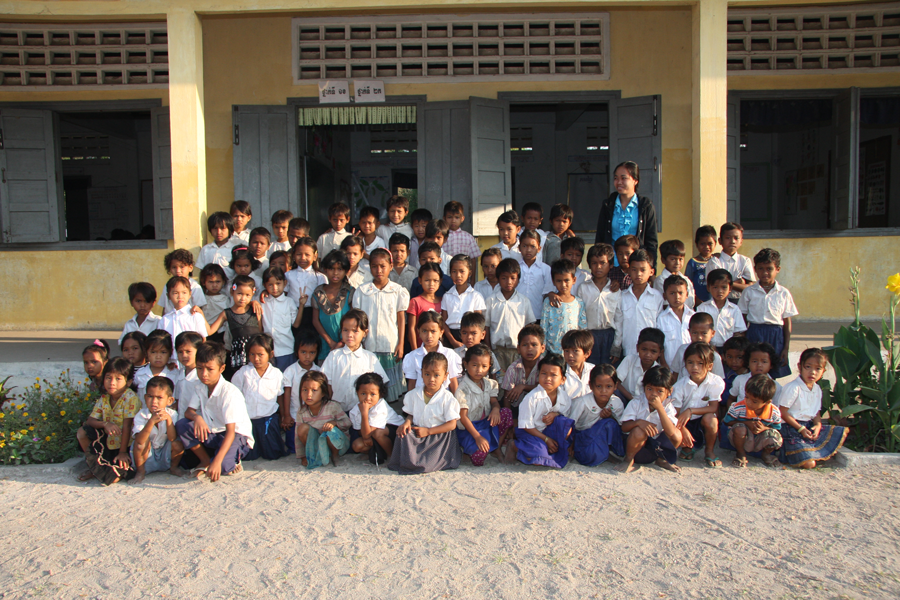 At SSI we define sustainability as generating both human and financial resources locally to improve and sustain rural schools. With your help we create and empower young changemakers to go back to their rural communities and deliver on our promise of sustainable, quality education for all. 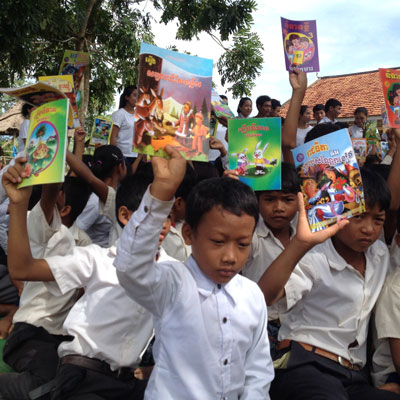 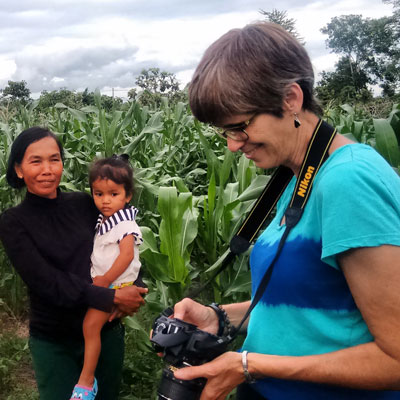 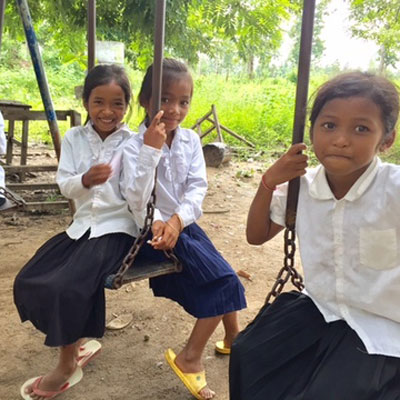 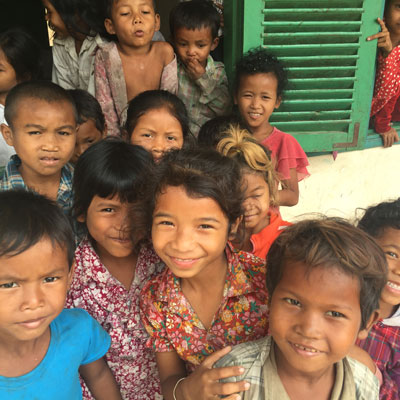 Sustainable Schools International (SSI) is a non-government organization that works to bridge gaps in access to education in Cambodia. Our self-sustaining model improves government schools and builds up community resilience in rural areas.

The current educational system in Cambodia leaves a lot to be desired. Lack of maintenance, low teacher attendance, and low retention rate of students all contribute to a cycle of economic devastation.

We provide direct support to eight rural schools and higher education scholarships to their graduates. 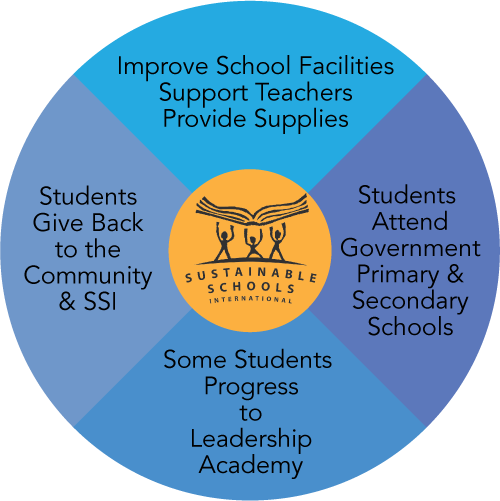 Over a decade of experience led to the "Sustainability Circle" that now informs  our work. Chrauk Tiek Primary School (our first school) not only maintained but increased the number of students this year. Teachers are staying in position at the school, showing a promising decrease in the turnover that is typical in the rural education system. The Community Prosper Bank Program, is specifically designated to support SSI's mission and is now contributing interest earned to higher education scholarships.

Sustainable Schools International utilizes a multitude of different programs in order to teach students the skills they need and create a sustainable community. 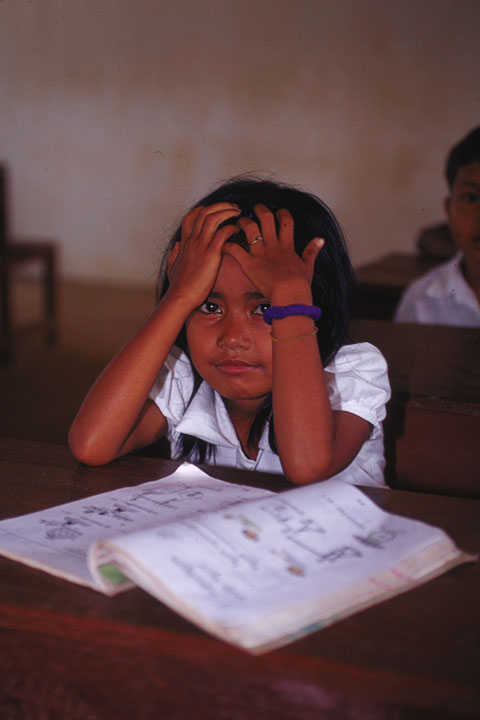 SSI strives to teach students practical skills to help them function in the world, such as conversational English. Dedicated volunteers help our students practice and develop these skills by conversing over Skype.

After completing a grade-9 education, driven students are given the opportunity to attend the Leadership Academy, which allows students to get a higher level education while learning important leadership skills that help them give back to their local communities. 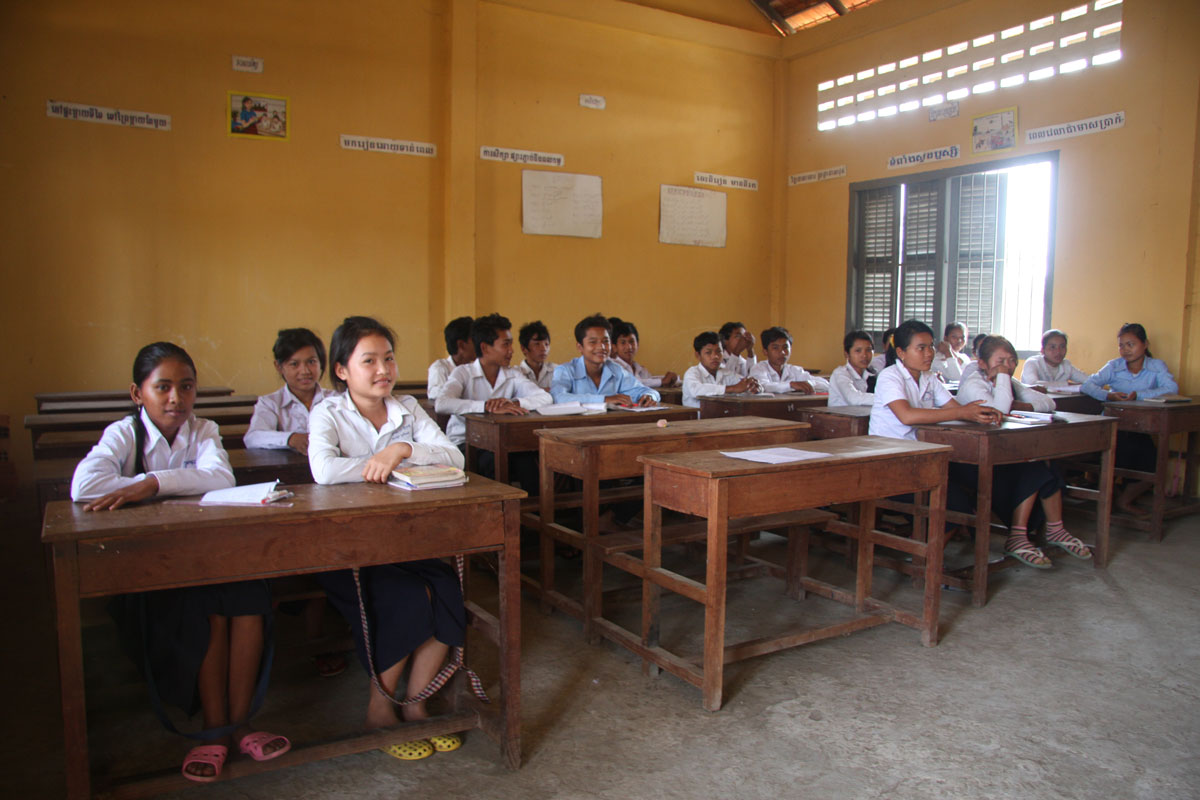 A SELECTION OF our Programs

Click on the program you want to learn more about:

What really makes the schools sustainable is a program called the Community Prosper Bank.

It is an alumni run bank that gives micro loans to students and local business owners, with all profits made from interest returning back to the schools. 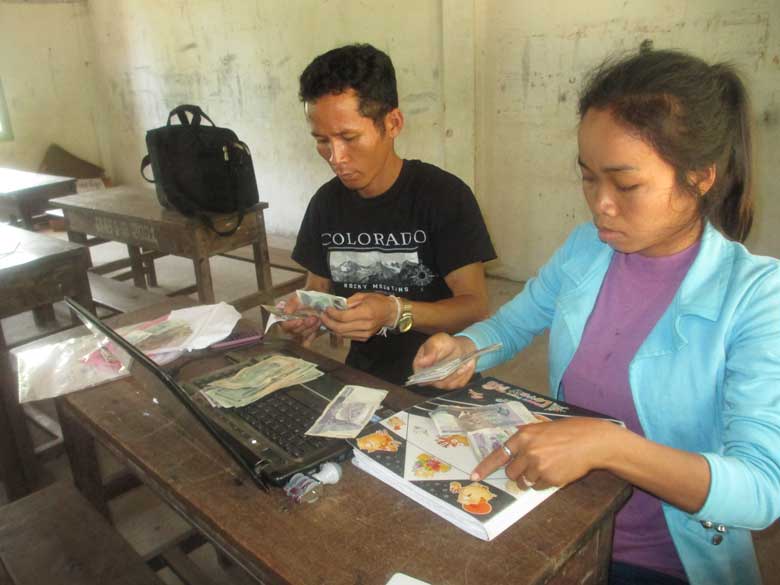 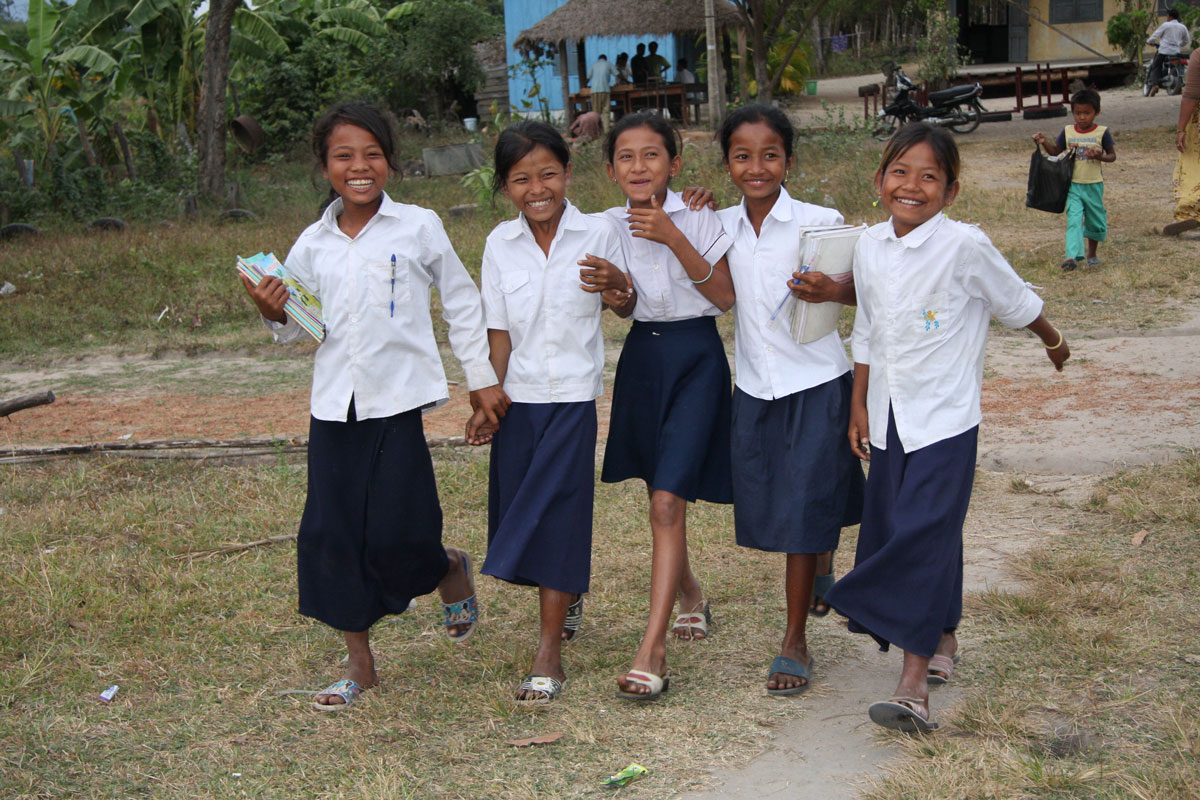 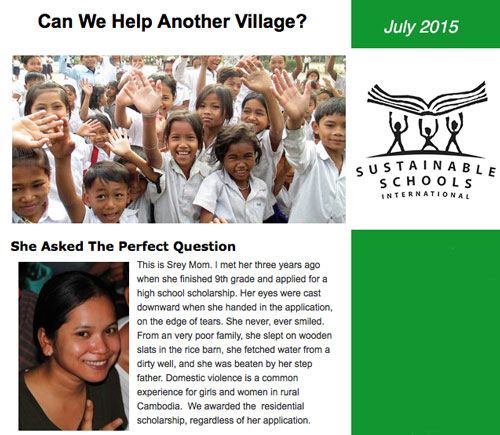 We will not publish, share, or sell your email address. We dislike spam just as much as you do. By subscribing to our newsletter you will receive a maximum of 1-2 emails per month from us.

Bones That Float
Teacher Absent Often
About the Author 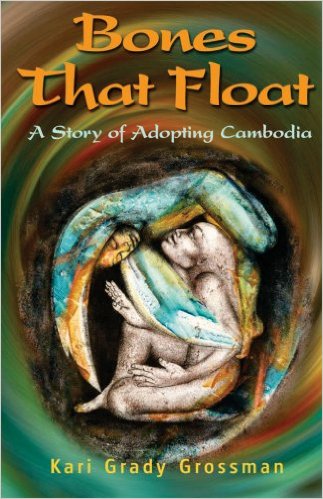 Bones That Float—a Cambodian phrase for the sacred that rises above the suffering—is a heartbreaking tale of hope.

“This rare book, despite its harrowing truths, is an effective and hopeful call to action – a nudge to your social conscience that will have you asking, ‘What’s my Cambodia?’ ”
—Angel Limb, Artsline Editor WCVE-FM 88.9 Public Radio, Richmond, Virginia

BUY FROM AMAZONBUY FROM PUBLISHER 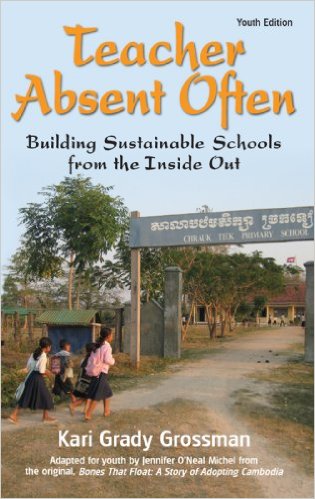 Kari Grady Grossman | Teacher Absent Often, Building Sustainable Schools from the Inside Out

In Teacher Absent Often, Kari weaves fascinating stories of learning to empower one poor, marginalized, illiterate community to sustain a school for their children. She reveals something every developed world do-gooder should know—how to help people in the way they want to be helped, not the way we think they should be helped. To read Teacher Absent Often is to feel the call to action.

Author Kari Grady Grossman's life has been anything but planned or ordinary. Born in Buffalo, N.Y., in 1968, Kari grew up in Arcade, N.Y., pop. about 10,000. While studying television writing at Syracuse University, Kari wrote a screenplay about a murder in her hometown. Her manuscript so enthralled a professor that he took it to his agent who immediately signed Kari up for representation.

With dreams of becoming a Hollywood screenplay writer, Kari set off for Los Angeles in her sky blue Oldsmobile Cutlass Supreme after graduating in 1990. She learned quickly that Hollywood can be fickle. Her screenplay was sidelined while another film about the same murder was made for TV starring Elizabeth Montgomery. Midway cross-country on her road trip, the budding writer took a detour into Colorado ski country and stayed for three years.

While working as a photographer at the Breckenridge Ski Resort, Kari met her future husband George Grossman, also a photographer. The two set off in 1991 on bikes despite the fact that Kari had not ridden since age 11 to take pictures in Alaska. After another year of dividing time between Colorado snowy peaks and Alaskan summer splendor, the couple moved to Jackson, Wyo., where they founded the Great Outdoors Photography Company in 1993.
The Grady Grossman's quickly gained a reputation as topnotch wildlife photographers, tracking wolves and eagles among other creatures. The couple also took on increasingly challenging mountaineering treks, including up Cotapaxi in Equador. In 1998, after selling their photography company, Kari turned her focus to writing and was sent to Alaska, to cover the Iditarod for Discovery Channel Online. In 2000, Discovery sent Kari to the Mount Everest base camp for nine weeks to cover an all women ascent.

Meanwhile, Kari and her husband had become serious about having children, only to discover that Mother Nature had other plans. By 2000, the couple had begun an adoption process in Cambodia, a country that they could hardly place on a map at the time. That soon changed. 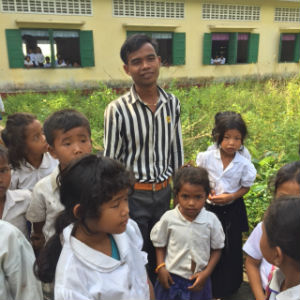 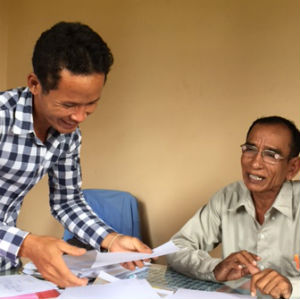 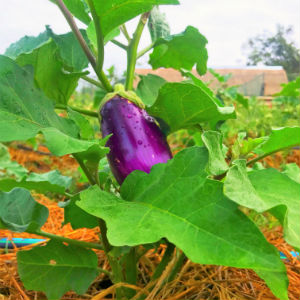 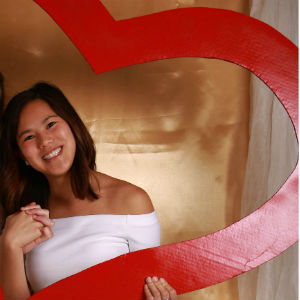 There had to be a way, Zoe Drigot figured, to be both here and there – 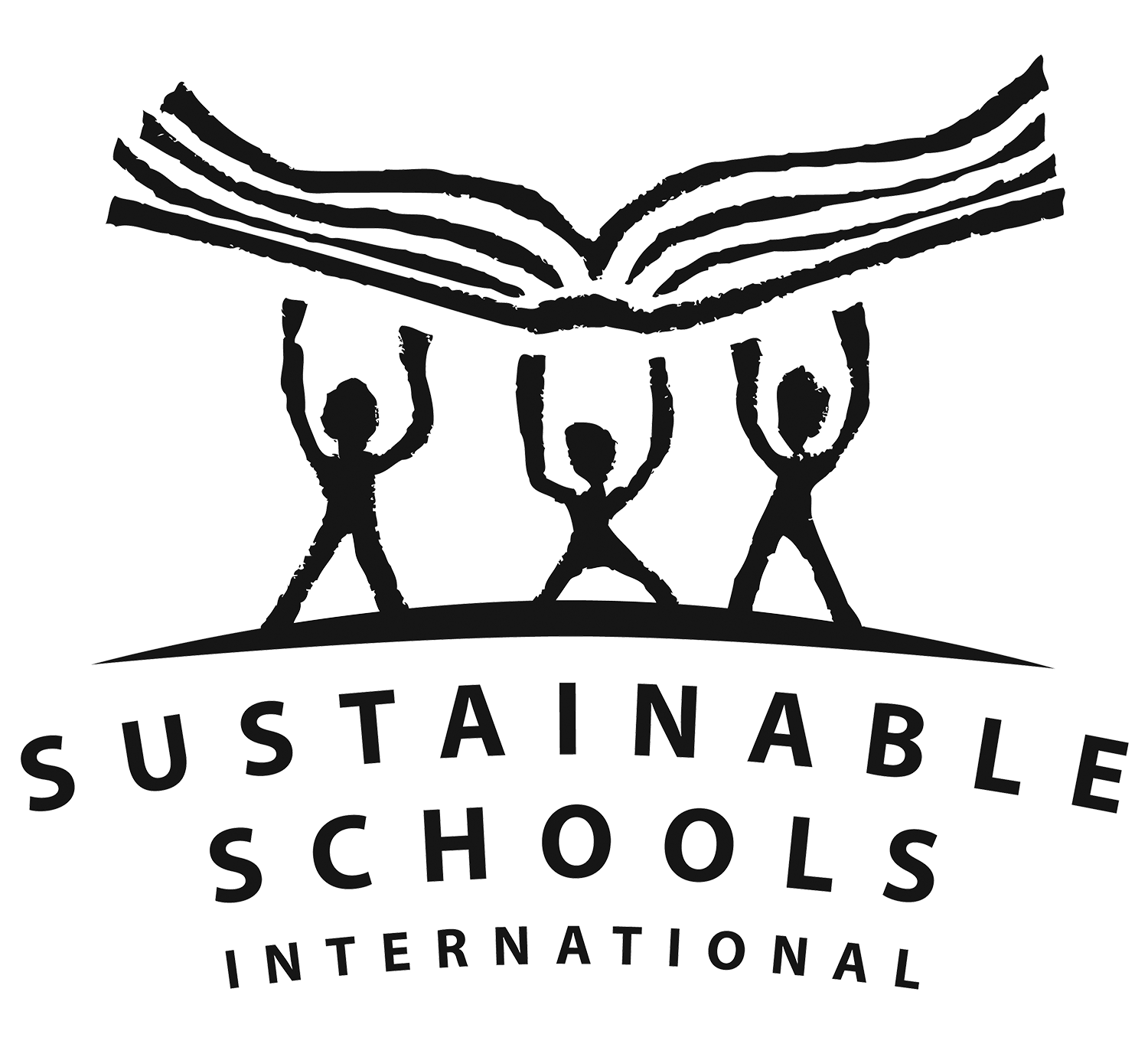